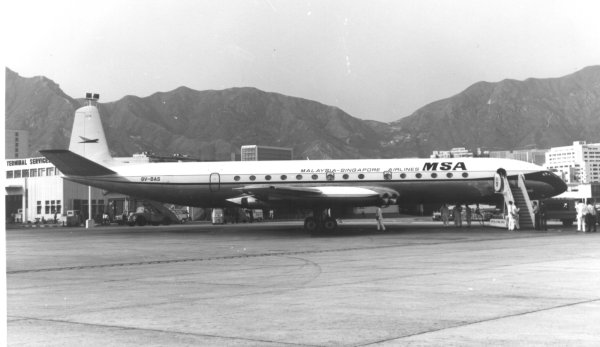 The Malaysian Airlines System was created in April 1971 after the split up of the Malaysia-Singapore consortium. Operations in its new guise began in October 1972.

The Consortium had been set up to provide joint operations in the vicinity of Singapore. In September 1964 it became known that Malaysia-Singapore were to buy five ex-BOAC Mk.4s. The major shareholders in the Consortium were BOAC, Qantas of Australia and the Governments of the Federation of Malaysia, Sarawak, Bruni and Sabah. The plan was that they would use the Comets to expand trunk routes in and around the Far East.

Before purchasing their own Comets the airline had been leasing (from October 1963) a surplus BOAC Comet 4 (G-APDH) so as to provide services connecting Singapore with Hong Kong, Penang, Bangkok, Saigon and Kuchind. Unfortunately this aircraft was written off during a heavy landing at Singapore in March 1964.

The component members of the consortium merged in December 1966 and the carrier became known as Malaysia-Singapore Airlines. Their aircraft were all re-registered thus: ‘AOA to 9V-BAS, AOB stayed the same, AOC to 9V-BAT, AOD did not change, AOE became 9V-BAU.

Between August and November 1969 all the original ex-BOAC Comet 4s were sold to Dan-Air, London.